Once their military service ends, many veterans enter civilian life with a bevy of aches and pains they didn’t have upon entering the Armed Forces. Because American veterans come in all shapes, ages, and sizes, medical issues gotten as a result of military service affect a wide and diverse group of people. As such, hundreds of thousands of veterans are treated for chronic pain (pain lasting more than 3 months) and mental health concerns. Over 440,000 people were prescribed Opioids in 2012 by the Department of Veterans Affairs (VA); 34% of those veterans had been taking prescription Opioids for at least 90 days. Furthermore, 64% of those individuals receiving a prescription for chronic pain had comorbid diagnoses for pain and mental health disorders. Ultimately, record-high prescribing rates among veterans led to increases in overdose deaths – veterans are now twice as likely to overdose from Opioids as non-veterans. However, only 1.1% of veterans have been diagnosed with an Opioid addiction.

In 2005, the Veterans Health Administration diagnosed 26,818 veterans with an Opioid Use Disorder (OUD). Nearly 15 years later, the number of veterans with an addiction diagnosis has more than doubled, despite rates for Opioid overdose deaths quadrupling in that time. Unmistakably, thousands of veterans have gone without receiving a substance use disorder diagnosis and, as such, without proper medical care and addiction treatment. In particular, the VA states that veterans from the Iraq and Afghanistan wars are at a “disproportionate risk of prescription Opioid misuse and overdose.” Moreover, the VA explains, the risk of fatality is likely even higher among veterans who are women, minorities, homeless, isolated, or have mental health disorders.

The National Council on Alcoholism and Drug Dependence estimates that “difficulties in civilian life” push approximately 13% of veterans into substance abuse.

The VA estimates that up to 40% of patients on long-term Opioid therapy have an Opioid addiction.

Factors That Contribute to Opioid Addiction Among Veterans

A majority of the factors that contribute to Opioid addiction among veterans are the same ones faced by the general population. However, some of these factors are amplified due to the particular stressors of military life. For example, physical pain affects a higher proportion of active duty military members than civilians. When these soldiers leave service, their pain may have worsened and become chronic. Nearly half of military members experience chronic pain after deployment compared to 26% of the general population. As veterans, 9.1% reported severe pain compared to 6.4% of non-veterans. In fact, veterans in every age group (except those aged 70 and up) experience more pain than the general population.

Other factors besides chronic pain that contribute to Opioid addiction among veterans include:

Additionally, a study on veterans perception of the danger of Opioids showed that a majority of veterans “underestimated their risk for Opioid overdose.” Because veterans often experience life-or-death, “high stakes” situations during their service, they may be less likely to see a legitimate prescription written by a doctor as potentially dangerous. Consequently, accurate prescription dosage, recognizing signs of prescription abuse, and symptoms of overdose should be discussed with his or her doctor to avoid fatal consequences.

Roughly 45% of active military members and over 50% of veterans have chronic pain, and high numbers of these groups are prescribed Opioids. Between 2001 and 2009, the number of prescription pain relievers written by doctors for Armed Forces members quadrupled to nearly 3.8 million prescriptions. While today the number of veterans with a long-term Opioid prescription is falling, levels have yet to return to pre-2003 numbers. 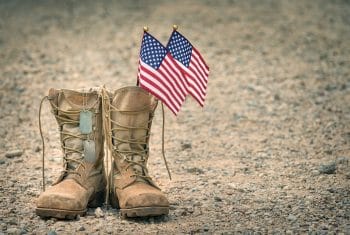 Active duty military service members and veterans were the primary groups exposed to Heroin during the World Wars, the Korean War, Vietnam, and Desert Storm. Heroin is a byproduct of Opium poppies indigenous to Southeast Asia. Today, the world’s leading producer of Opium is Afghanistan. Because Opiates (substances made from the Opium plant) are known for their pain-relieving and high-inducing properties, the drug quickly spread in popularity among soldiers.

Today, while Heroin was the second-most commonly reported substance of abuse among veterans entering addiction treatment (10.7%), non-veterans are still more likely to report Heroin as their primary substance of abuse (20.9% of non-veterans reported Heroin as their primary addiction). However, among veterans, Heroin-only Opioid use is relatively high among veterans born before 1970 (i.e. soldiers who likely fought in the Korean and Vietnam wars). Unlike veterans who reported prescription Opioid abuse for the purpose of pain management, 50% to 74% of veterans abusing Heroin said it was for “enjoying the experience.”

Addiction treatment for veterans may require certain features that non-veterans do not need. For instance, detox and rehab services should include treatment for co-morbid mental health disorders, medical conditions, or physical disabilities. While many veterans have access to VA health services or are enrolled in Tricare insurance, the Army reports that only 40% seek professional help after receiving a diagnosis for serious chemical dependency or emotional disorders.

VA medical health professionals suggest veterans looking for addiction treatment seek facilities that offer “whole person” treatment. This type of therapy should focus on the biological, psychological, and social aspects and disorders that affect the individual. Programs that treat the “whole person” will include:

Veterans should also reach out to their local VA Substance Use Disorder Treatment Program for a directory of available addiction treatment services.