Codeine is an Opioid used to relieve mild to moderate pain and reduce coughing. The drug belongs to a class of medications called Opiate analgesics and can be consumed as either a tablet, capsule, or liquid. In the United States, Codeine is heavily regulated as a Schedule II narcotic and is available only by prescription, although many of its analogues can be purchased over the counter. When Codeine is used to treat pain or discomfort, it works by altering the way the nervous system responds to pain. Codeine bonds to Opioid receptors in the brain and suppresses nerve endings to help control or dull pain that is received by neurons. Therefore, the drug will help relieve symptoms of pain but it will not treat the cause of the symptoms that a patient is experiencing or speed recovery.

Although Codeine is regarded as a rather weak Opioid with fewer risks compared to other high potency Opioids such as Heroin, it is still a highly addictive drug and can be very dangerous to consume.

Effects of Codeine Use

As with any prescription medication, Codeine comes with its own set of side effects, including:

Despite it being weaker than some other pain relievers, it is still possible to overdose on Codeine. Symptoms of overdose are: 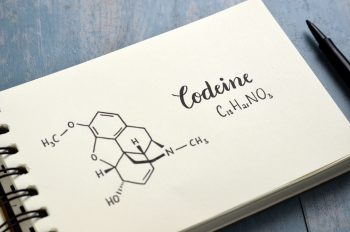 Like any Opioid, Codeine dependency develops from consistently taking the drug over an extended period of time. Using Codeine for long durations can cause people to develop not only a tolerance and physical dependence, but an addiction.

Though not as addictive as other prescription drugs, Codeine is habit forming, and should only be taken as a doctor prescribes. Because of how much weaker it is compared to other Opioids, there is a common misconception that those prescribed won’t develop a dependence. However, the drug is derived from Morphine and affects the same areas of the brain as other Opioids, making it addictive. The risk of addiction rises during consistent use during long-term Codeine prescriptions, which can last up to several months. Additionally, it’s relatively common for doctors to increase the dose for a patient as they build up a tolerance to Codeine’s effects, which inadvertently contributes to the development of an addiction.

Despite the fact that it is weaker than most Opioids, an individual entering recovery from an addiction to Codeine will still likely exhibit symptoms of withdrawal. Withdrawal occurs because the body has become so accustomed to the presence of Codeine that it can no longer function “normally” without it. When the drug is no longer present, the body’s system struggles to adapt. If any of the following withdrawal symptoms are present, people should seek Codeine addiction treatment immediately:

These symptoms of withdrawal can be debilitating and apply a lot of pressure on someone suffering from addiction, especially without medical assistance to help manage the pain. Many recovering users will then relapse simply to quell the pain of the withdrawal symptoms associated with dependence on the drug.

Codeine and Other Drugs

Codeine is often combined with a variety of other drugs such as decongestants, muscle relaxers, and other pain relievers to aid in different ailments and to enhance recreational use. The most infamous of medical combinations is a cough syrup made of Codeine and Promethazine, which is the main ingredient in the popular drink “lean” or “purple drank.” Lean is a recreational form of the drug made by mixing prescription-grade cough syrup with soft drinks, such as Sprite or Mountain Dew, for consumption in large doses. Codeine is not meant to be consumed as a recreational beverage so drinking lean can cause many physical problems, especially if it’s abused for a long period of time. Additionally, Codeine has been found to be a common gateway drug into other substances, especially other Opioid pain relievers such as Oxycodone.

If you believe that you or a loved one may be suffering from an addiction to Codeine, professional help is available. Seeking treatment can be the difference between continuing down the spiraling road of addiction or starting on the journey to a healthier and happier life.

Treatnent specialists are waiting for your call

We strive to be fully transparent in all of our relationships. To that end, we want you to be aware that OpioidHelp is compensated by Legacy Healing Center for the work OpioidHelp does in the development and operation of this site. Legacy Healing Center was carefully vetted and selected to be a trusted provider and partner with OpioidHelp, based on the quality of treatment they provide and their rigorous commitment to ethical practices.

All calls to general contact numbers and contact us forms on this site are routed to Legacy Healing Center. If a provider is unable to assist with a particular need they are committed to providing direction and assistance in finding appropriate care.