Opioid Abuse In The Midwest

The Effects of Opioid Abuse in the Midwest

While Chicago, home to over 2.7 million people and the country’s third largest city, is located within the Midwest, the majority of counties in the region are rural. While most of the country’s rural counties have seen shrinking populations for years, the problem is worse for Midwestern municipalities. Subsequently, the impact of Opioid abuse in the Midwest has been exponentially more destructive. In Austin, Indiana, for example, a town of 4,000 experienced an HIV outbreak of 190 new cases in just one year–equivalent to nearly 410,000 new cases in a city the size of New York.

In small towns and counties across the Midwest, the negative effects of Opioid abuse have been similarly overwhelming. In 2016, there were more than 40,000 overdose deaths involving Opioids nationwide; approximately 9,853 of which occurred in the Midwest. Typically, the effects of an addiction and overdose crisis influence states on two levels: the individual and the community. The table below illustrates the negative impact addiction has on these levels.

What Factors Contribute to Opioid Abuse in the Midwest?

The primary factors contributing to Opioid abuse in the Midwest include: 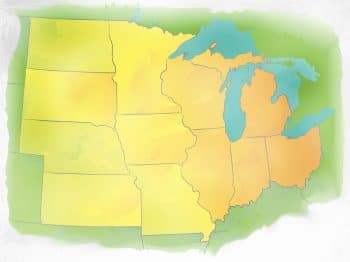 In 2017, drug overdose fatalities in rural areas surpassed urban rates–upending the myth that drugs are a bigger problem for cities. In addition to having higher rates of cigarette smoking, high blood pressure, and obesity, people in rural areas also tend to be older and sicker than people in urban areas. Access to healthcare is likewise worse than it is in urban areas. Many counties rely on volunteer emergency services who may not be fully trained or equipped to handle an overdose. For this reason, overdose fatality rates are higher in rural areas. Often, by the time first responders arrive to provide life-saving care, the individual has already passed.

Compounding the problems of Opioid abuse in the Midwest are a lack of recovery resources. More than 82% of people in rural areas have no access to detox services in their county, despite high rates of drug abuse among youths and groups likely to be prescribed long-term Opioid medications (i.e. the elderly and people working in labor-intensive industries like agriculture). Moreover, 60% of rural counties don’t have a physician with a Drug Enforcement Administration waiver to prescribe Buprenorphine (a common addiction treatment medication). These resources are vital to treating addiction in the long-term because many people don’t want to leave home for months to attend a rehab center.

Overcoming the Stigma of Addiction

In a number of municipal surveys, a majority of Midwestern respondents reported that the stigma of addiction is a major barrier to seeking recovery. One study found that half of rural adults reported viewing addiction as a choice as opposed to what it is: a medical disorder requiring clinical treatment. As such, thousands of people don’t look for treatment despite struggling with the consequences of addiction.

Compared to urban populations, rural residents were far more likely to enter addiction treatment following referral from the criminal justice system. Over half of rural treatment admissions came as a result of criminal charges; only 22.8% entered themselves into treatment. In order to increase rates of rehab admissions and decrease addiction and overdose fatalities, Midwestern communities will need to adopt more prevention programs and evidence-based treatment centers.

For those suffering from an Opioid Use Disorder, getting through each day can be grueling, depressing, and isolating. But, as more addiction treatment resources come to the Midwest, more options become available for residents within their own communities. Check the Substance Abuse and Mental Health Services Administration website for certified recovery resources near you.