Vicodin is a brand name variety of the combination pain reliever Hydrocodone-acetaminophen (others include Lorcet®, Lortab®, and Norco®). Hydrocodone is a semisynthetic prescription Opioid, made from Opium alkaloids, used to treat moderate to severe pain. Acetaminophen is used to temporarily relieve minor aches, pains, and fever. When used in conjunction with an Opioid like Vicodin, it actually enhances the pain-reducing effects of the Opioid, making it a great for pain relief. It does not enhance euphoric effects. It works primarily in the central nervous system and may slow breathing. Vicodin is typically prescribed as a pill but is also available as a solution and elixir.

Vicodin is among the most commonly prescribed Opioids (after Oxycodone brands OxyContin® and Percocet®). As such, the drug has contributed to record high addiction and overdose rates in the U.S. In 2014, the Drug Enforcement Agency (DEA) moved Vicodin from a Schedule III substance to the more regulated Schedule II.

In addition to pain relief, taking Vicodin may cause:

Vicodin’s effects are similar to Morphine; two 10-milligram tablets are equivalent to 30 milligrams of Morphine. When a person takes too much Vicodin (that is, more than their body is able to process), they may overdose. Vicodin overdose, like other Opioid overdoses, reduces an individual’s breathing ability to the point that oxygen is unable to reach the brain. Within 6 minutes of being cut off from oxygen, the brain will begin to deteriorate. After too long without oxygen, the individual is at risk of serious damage and death. Naloxone (or Narcan), however, can be used to reverse a Vicodin overdose by blocking the drug’s effects.

The effects of Vicodin can also become more intense when abused alongside other Central Nervous System (CNS) depressants. For instance, alcohol is commonly co-abused with Opioids. When combined, breathing rates can be reduced even more rapidly and become harder to reverse. Co-abusing drugs and alcohol can lead to liver, kidney, lung, heart, and brain damage. 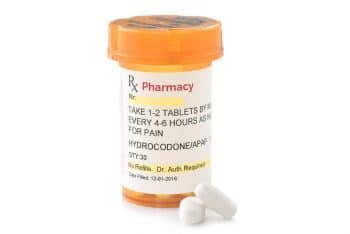 Like all prescription Opioids, over time an individual’s body may become accustomed to their current dose. When this happens, many people take more pills to get the same effects or even to feel normal. This is known as a physical tolerance and occurs in many analgesic patients. However, it is not the same as an addiction. A Vicodin addiction involves uncontrollable behavior related to securing more drugs and using despite negative personal, social, professional, or legal consequences.

Dangers of Fentanyl in Counterfeit Vicodin

With the rise in the prevalence of illicit Fentanyl (a synthetic Opioid up to 100 times stronger than Morphine) in street drugs, emergency medical services and county coroner’s alike are reporting the presence of Fentanyl in previously unexpected places. Counterfeit pill manufacturers are increasingly “cutting” or “pressing” their pills with the more powerful Fentanyl.

Also, black market medication can be almost impossible to detect. When purchased from a friend, online, or on the street, people are often unaware their pills are fake. Without testing prior to taking it, people are completely unable to identify the presence of Fentanyl (it is colorless and odorless). In one tragic example, music legend Prince suffered a fatal overdose after taking a counterfeit Vicodin laced with Fentanyl. The musician was unaware of the pill’s toxicity and post-mortem reports showed “exceedingly high” concentrations of Fentanyl in his body.