The Link Between Depression and Opioids

America’s Opioid crisis has affected millions of American families. Each day, more than 130 Americans fatally overdose on an Opioid. The ones who do not fatally overdose often succumb to painful emotional and psychological withdrawals once they wean themselves off the substance. Because of increasing Opioid awareness campaigns and literature, people are become more aware of the damage of abusing prescription Opioids. In particular, there is a growing awareness of the link between depression and opioids.

New literature furthers the connection between depression and prescription Opioids. The Journal of General Internal Medicine notes patients taking prescription Opioids for an extended amount of time are more likely to suffer depression. Therefore, people battling years of Opioid abuse—both prescription and illicit (Heroin, Fentanyl) endure the highest level of depressive episodes. To add to this, a St. Louis University study added, “10% of 100,000 patients developed depression after a month of taking meds.” Lastly, another study confirmed “a 1% increase in state-level depression diagnoses associated with a 26% increase in Opioid analgesic-related deaths.” These findings are surprising yet realistic, due to an Opioid’s highly addictive and euphoric-inducing qualities.

Co-occurring disorders and opioid use often go hand-in-hand. Examples of co-occurring disorders are emotional, physical and mental conditions, such as depression, anxiety, or health conditions directly involved with drug and alcohol dependence. In the example of chronic pain and a patient taking a prescription opioid, they may develop a tolerance to the drug as they realize the drug makes them feel good. They may also feel encouraged to continue to abuse the pill as it helps them cope with chronic pain.

Co-occurring disorders such as depression tragically make it both more likely that someone will develop an opioid-use disorder and make it more difficult for many to recover from addiction. This is because opioid-use often initially makes symptoms better, leading the abuser to take increasing amounts. However, increasing amounts of opioids often make symptoms worse overall, leading to greater use, and et cetera in a vicious cycle. Also, once the individual stops taking opioids, the initial symptoms they were treating often return, complicating treatment and increasing the risk of relapse.

Depression as a Side Effect of Opioid Withdrawal 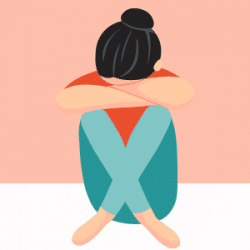 A common withdrawal symptom of opioids is depression. When the brain is under the influence of Opioids, the substances emit chemicals to produce euphoric feelings. These feelings create an intense “high”, which often becomes the source of a substance use disorder. Many taking an Opioid like Percocet or OxyContin for severe chronic pain find the drug helpful for pain relief.

When the patient is taking a prescription Opioid, they feel a sense of relief as their depression subsides. As a result, OxyContin, Morphine or a Percocet pill appears to heal more than 1 wound. Once someone goes “cold turkey”, their body suffers, and the high they once felt can suddenly cause them to crash into depressive lows.

The transition from prescription Opioids to illicit Opioids often occurs when abusers can no longer easily acquire or afford their preferred prescription opioid. Unfortunately, illicit Opioids like Heroin and street Fentanyl are often more powerful and more addictive than prescription opioids, and also more dangerous. After extended use of Percocet, for instance, a patient can become used to the effects of the medication. After trying different prescription Opioids, a patient may go to the street for a stronger, but more deadly Opioid like Heroin. Illicit Opioids with higher addiction rates also create depression in users if they stop using and enter withdrawal.

Taking prescription Opioids as prescribed is wise as it keeps the patient safe. Patients enduring pain may develop depression in response to their physical conditions, which can put the patient at even greater risk of abusing Opioids. Practicing responsibility with medication can decrease temptation and help prevent developing an addiction. Maintaining a healthy relationship with your medical professional and understanding the side effects of medication can discourage harmful drug abuse.

Struggling With Depression and Opioids?

If you’re struggling with pain management or are developing a dependence, there is rehab help available.