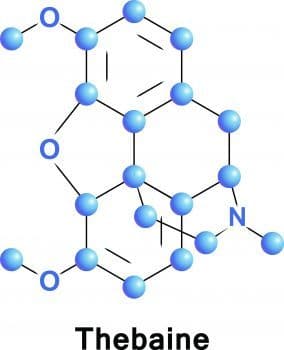 The Opium poppy plant (Papaver somniferum) contains six alkaloids commonly used in medicine and commercial products. The three used most often in analgesics are Morphine, Codeine, and (to a lesser extent due to its greater toxicity) Thebaine. The substance is a precursor of one of history’s oldest analgesics, Morphine, and is named for the ancient Egyptian city, Thebes. Thebaine is also known as paramorphine due to its stimulatory effects–as opposed to the depressant effects of Morphine and Codeine.

Normally, Opium contains between 0.3% to 1.5% Thebaine (as much as 6% has been reported in some species). It is classified as a narcotic and convulsant and, as such, is an internationally regulated product. Natural and synthetic Thebaine derivatives are used as “starting material” in some medications to aid in absorption. It can be found among a long list of compounds in a variety of prescription Opioids, including Buprenorphine, Oxycodone, Oxymorphone, and Naloxone.

The effects of Thebaine are similar to other Opioids but differ in distinct ways due to its tendency to cause involuntary convulsions. It can block pain signals but, as a partial agonist, is not strongly associated with the “high” caused by drugs like Vicodin® and Heroin. Additionally, the substance is considered toxic. Abuse causes muscle spasms similar to the effects of Strychnine (found in rat poison) and is notably different than seizures potentially caused by Morphine. In fact, in studies, no tolerance to its convulsant effects could be achieved.

Effects of Thebaine use include:

Can I Get Addicted?

Perhaps because Thebaine binds to the same brain receptors as other Opioids, a person can develop a physical dependence to the opioid. In one study of Thebaine addiction, severe withdrawal symptoms were reported after one month of intravenous use. Moreover, Naloxone (an anti-overdose medication) was 10 times less effective against Thebaine than Heroin. However, “pure” Thebaine is uncommon, hard to procure, and not typically used in the manufacture of illicit drugs. Thus, Thebaine’s potential for abuse is not as high as many Opioids and is listed as a Schedule II drug.