How Many Teens Use Opioids or Have an Addiction?

As the Opioid Epidemic has worsened over the past decade, rates of teen Opioid addiction have actually fallen in many areas of the country. Unlike other age groups where drug abuse has increased four- or fivefold, teenaged abuse of prescription Opioids has declined since 2009. Past-year abuse of painkillers like Vicodin® has dropped from 10.5% among 12th graders to 1.7% in 2018. Among 8th graders, past-year misuse of OxyContin® was under 1% and misuse of Vicodin was 0.6%.

Across the U.S., 3.6% of teens aged 12 to 17 years-old reported abusing Opioids in the past year. However, some states (such as Louisiana, Arkansas, Hawaii, and South Carolina) have much higher Heroin use rates among high schoolers. Because people in rural areas are more likely to use Heroin for the first time at a younger age, students in rural states may be more at risk for developing an Opioid addiction.

Yet, as rates of Opioid misuse fall nationally, so too does the perception that Opioids are easy to obtain. In 2010, over half of 12th graders said pills were easy to get. By 2018, that number had fallen to 32.5%. Today, students are nearly 4 times more likely to use e-cigarettes/vaping pens and 10 times more likely to drink alcohol or use Marijuana.

In 2017, the CDC estimated 9.6% of Louisiana high school students had ever used Heroin – more than any other state with data.

More than 75 teens die of a prescription Opioid-related overdose each year. 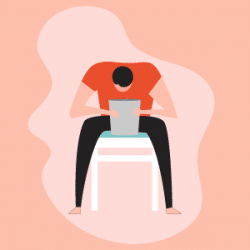 About a thousand teens (12 to 17 years-old) qualified as having a Heroin Use Disorder in 2016 – a small fraction of the total of adults with a Heroin addiction in the U.S. Of the more than 2 million people over 12 with an Opioid Use Disorder (OUD), 152,000 were between the ages of 18 and 25. Subsequently, most researchers believe that while some adolescents develop severe Opioid addictions at home, a majority of teens wait to start using Heroin until they are out of the house or high school.

However, recent insurance company data shows that growing numbers of teens are at risk of developing an addiction following sports injuries and surgery. For instance, teens who get an Opioid prescription after a wisdom tooth removal (a common surgery for teenagers) are 10 times more likely to acquire an addiction to Opioids than those who don’t. Moreover, prescriptions from the dentist make up 31% of teens’ first Opioid prescription.

Other factors that put teens at risk of an Opioid addiction include:

How to Recognize If Your Teen Has an Opioid Addiction

If you think your teen might be suffering from an addiction to Opioids there are a few signs of abuse to look out for. All Opioids (from Black Tar Heroin to Fentanyl) have the same range of effects with varying strength. Some common signs of Opioid abuse include:

Once a teen’s body is dependent on Opioids to function normally, stopping use will result in symptoms of withdrawal. If your teen has recently stopped taking Opioids (either because they are trying to quit or have run out) and exhibit some of the following withdrawal symptoms, they may have an addiction.

Opioids change the way the brain functions in a relatively short period of time. They make the person want to take more while simultaneously reducing their self-control over decision-making. Teens are especially vulnerable to these negative effects and may experience them more intensely than adults because their brains have yet to fully develop areas vital to decision-making (like the prefrontal cortex). As such, it is essential that good prevention measures are in place to keep teens safe.

Getting Treatment for Teenage Opioid Addiction

Depending on the severity of the addiction, teens may need to attend outpatient rehab while staying at home or entering an inpatient rehab to concentrate solely on recovery. Many professional detox and rehab services are able to prescribe Opioid addiction treatment medications like Buprenorphine and Methadone. These medications reduce painful withdrawal symptoms and can help curtail drug cravings. Lastly, it’s important for teens and their families to attend 12-step and support groups that promote a lasting, healthy recovery-focused lifestyle.