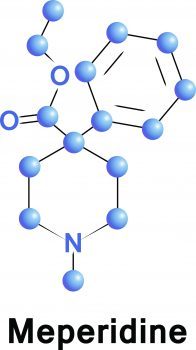 Demerol is the brand name for Meperidine, an Opioid painkiller that is used to help relieve moderate to severe pain. The drug belongs to a class of medications called Opiate analgesics and can be consumed as either a tablet or injected as a liquid solution. Demerol is heavily regulated as a Schedule II controlled substance and is therefore only available by prescription from a doctor. People who buy Demerol illegally on the street will often refer to the drug as “Juice,” “Dillies,” “D,” or “Dust.” As an Opioid, the medication poses a high potential for abuse, but it is commonly prescribed in hospital settings for post-operative pain due to its powerful effects.

Demerol works by binding to the Opioid receptors in the brain and changing the fundamental feeling the body goes through, tricking the central nervous system into thinking that pain actually feels like pleasure. High doses of Demerol can produce a euphoric feeling in consumers, often referred to as a “rush.” These feelings of pleasure then lead many individuals to use the narcotic for non-medical reasons. When used outside of medical purposes or for recreational use, Demerol can be highly addictive, as people begin to take more and more of the drug to achieve greater feelings of pleasure.

Effects of Demerol Use

Demerol is most commonly used for pre- and post-operative pain during procedures related to labor, childbirth, cancer, heart attacks, and severe accidents. As with any prescription medication, Demerol comes with its own set of side effects, including:

Demerol overdose can occur if an individual has taken too large of a dose of the drug. If someone has overdosed, immediately administer Naloxone if available and call 911. Symptoms of overdose include:

Many that are prescribed Demerol don’t realize that they have become addicted to the substance, but addiction to Demerol can occur both if the drug is misused or abused and at recommended dosages. Patients begin taking the drug as prescribed, but once a tolerance builds up, they start increasing their doses to greater and greater amounts just to feel the same relief that they once did. This then leads to the development of a physical dependence, and eventually, an addiction. A Demerol addiction is a chronic neurobiological disease with genetic, psychological, social, and environmental factors that is typified by inability to control use, compulsive use, continued use despite harmful consequences, and cravings.

Demerol tablets are abused by swallowing, crushing, chewing, snorting, or injecting the dissolved product, which often initiates or worsens an addiction. Additionally, many will take the drug with alcohol or other central nervous system depressants to enhance the “high” that they are experiencing. Others may use Demerol in order to reduce the unpleasant side effects of stimulants, such as Cocaine or Adderall. This form of polysubstance abuse can easily lead to overdose and multiple other adverse health effects, including cardiovascular collapse, stroke, heart attack, and even death.

After a physical dependence has developed, abrupt discontinuation or a significant dosage reduction of Demerol will often result in withdrawal. Withdrawal occurs because the body has become so accustomed to the presence of the drug that it can no longer function “normally” without it. Withdrawal may also be precipitated through the administration of Opioid antagonists like Naloxone during the midst of an overdose. Symptoms of withdrawal are not limited to, but may include:

The effects of withdrawal from Demerol can be extremely uncomfortable and debilitating, especially for people who have been addicted to the drug for a long period of time. Because of the harshness of withdrawal, Demerol should not be discontinued without the supervision of medically-trained professionals in a rehab or hospital setting.

Get Help for Demerol Addiction

If you or a loved one is struggling with an addiction to Demerol, know that you are not alone. Millions of people have found relief from their opioid addiction through the help of treatment programs.