Opioids are a class of Opium-derived drugs that bind to Opioid receptors in the brain, block pain sensations, and slow down physiological function of the central nervous system. Some of the drugs are made directly from the plant, while others are made by scientists in labs using the same chemical structure. Opioids generally fall into one of three categories: natural, semi-synthetic, and synthetic. The presence of dopamine, one of the chemical messengers that the brain uses to send signals that induce feelings of pleasure, is increased by Opioid drugs, making them popular drugs of abuse. The “high” from Opioids is both mellowing and pleasant. This can be dangerous because Opioids can be highly addictive, and overdose is common. Some of the most common opioids include: Codeine, Demerol, Fentanyl, Heroin, Hydrocodone, Morphine, Oxycodone, and Thebaine.

What Is the Difference Between Opiates and Opioids?

The terms Opiate and Opioid can be confusing as they are often used interchangeably and incorrectly. An Opiate is a drug naturally derived from the flowering Opium poppy plant. Examples of Opiates include: Codeine, Heroin, and Morphine. An Opioid, on the other hand, is a broader term that includes Opiates and any substance, natural or synthetic, that binds to the brain’s Opioid receptors. Some examples of Opioids include: Fentanyl, Hydrocodone, and Oxycodone.

It is important to note that while all Opiates are Opioids, not all Opioids are Opiates. Additionally, just because Opiates are “natural” does not mean that they are any less harmful. Just like synthetic Opioids, Opiates are highly addictive and frequently abused.

What Is the Opioid Epidemic?

The Opioid Epidemic is a term that refers to the rapid increase in the use of prescription and illicit Opioid drugs in the United States over the past two decades. In the late 1990s, pharmaceutical companies assured the medical community that patients would not become addicted to Opioid pain relievers, prompting healthcare providers to prescribe them at greater rates. Many were led to believe that Opioids were the best way to treat their patients’ moderate-to-severe or chronic pain with little to no negative effects.

Increased prescription of opioid medications led to widespread misuse of prescription Opioids before it became clear that these medications are actually highly addictive. The extensive prevalence of addiction led to high rates of Opioid-related overdoses, as well as the rising incidence of newborns experiencing withdrawal syndrome due to Opioid use and misuse during pregnancy. Opioid overdoses accounted for more than 42,000 deaths in 2016, more than any previous year on record, and an estimated 40% of those overdose deaths involved a prescription Opioid medication. In response to these staggering statistics, acting Health and Human Services (HHS) Secretary Eric D. Hargan declared the country’s emerging Opioid crisis a national public health emergency in 2017.

Why Are Opioids Dangerous?

Opioids are extremely addictive and dangerous drugs. Over time, Opioid use can change the chemical composition of the brain, leading to addiction. Addiction means a person continues to use a drug despite the negative consequences, and actively tries to get more and more of the drug. As the user’s tolerance grows, they have to take higher doses of the Opioid to get the same effect. Opioids impact the entire body and can be fatal at comparatively smaller doses than other drugs, which often results in deadly overdoses. The combination of tolerance and lethality has made Opioid overdose the single greatest concern in the country’s drug epidemic. Every year, more than 50,000 Americans die of Opioid overdose.

Which Opioids Are Most Addictive?

All Opioids can be addictive, and they all carry a high potential for abuse, even when they are taken as prescribed by a doctor for pain. The risk of addiction goes up when the drugs are taken more frequently or via different methods than prescribed, such as crushing a pill so that it can be snorted or injected. When Opioids are taken this way, the effects are felt faster and a greater sense of “euphoria” is generated. This can lead to addictive behavior and accidental overdose. 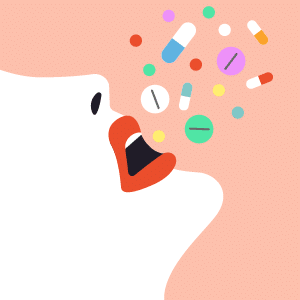 When taken as prescribed, Opioid medications are relatively safe and can reduce pain in the short-term. But if a person misuses the drug and doesn’t take them exactly as prescribed, Opioids can have dangerous consequences. Repeated misuse of prescription Opioids can result in the development of a substance use disorder, which can cause multiple health problems and failure to meet responsibilities at work, school, and home. Treatment that is long-term and longer than 30 days with oral Opioids poses a higher risk of physical dependence and addiction, as the body is exposed to the drug for greater lengths of time and a tolerance can develop.

As is the case with illicit Opioids such as Heroin, an individual can also overdose on prescription Opioids. When people overdose on an Opioid medication, their breathing often slows or stops. This can decrease the amount of oxygen that reaches the brain, resulting in coma, seizures, permanent brain damage, and even death. Additionally, people who become addicted to an Opioid medication and then stop using the drug can suffer from withdrawal symptoms. Withdrawal can begin as early as a few hours after the drug was last taken. These symptoms can be severely debilitating and cause a wide range of physical and mental health problems.

What Are the Signs of Opioid Addiction?

The signs of Opioid misuse and addiction can be physical, behavioral, and psychological. One of the clearest signs of addiction is an individual craving his or her Opioid drug of choice and not being able to stop using the drug despite the negative consequences.

Other signs and symptoms of Opioid abuse include:

What Are the Most Effective Treatments for Opioid Addiction?

A range of treatments, including medicines and behavioral therapies, are effective in helping people with Opioid addiction. There are three FDA-approved medicines to treat Opioid addiction. Buprenorphine and Methadone work by binding to the same Opioid receptors in the brain as the Opioid medicines, reducing cravings and withdrawal symptoms. Another medicine, Naltrexone, blocks Opioid receptors and prevents Opioid drugs from having an effect.

Counseling and therapy are also important in helping people end Opioid addictions, rebuild relationships, and create healthy lifestyles. Behavioral therapy is very effective in treating addiction to prescription Opioids, as it helps people modify their attitudes and behaviors related to drug use and increase healthy life skills. Cognitive behavioral therapy helps modify the patient’s drug use expectations and behaviors, and also effectively manage triggers and stress. Multidimensional family therapy, developed for adolescents with drug use problems, addresses a range of personal and family influences on one’s drug use patterns and is designed to improve overall functioning.

Quitting Opioid use can be hard, but it is possible. These behavioral treatment approaches and Opioid addiction medications are very effective and have helped thousands end their addictions.

How Can Opioid Misuse Be Prevented?

Prevention is the first line of defense when it comes to Opioid addiction, as avoiding abuse of these substances is the best way to keep from becoming addicted to them. Any use of a prescription medication without medical need and supervision from a trained healthcare professional is considered abuse and can manifest into addiction.  Prescription drug monitoring programs, state-run electronic databases used to track the prescribing and dispensing of controlled prescription drugs to patients, are also important tools for preventing and identifying prescription drug misuse. Additionally, consumers and caregivers should remove expired or unused Opioid medicines from their home as quickly as possible to help reduce the chance that others may accidentally take or intentionally misuse the unneeded medicine. Medicine take-back options are the preferred way to safely dispose of most types of unneeded medicines and can be found at DEA-registered collection sites. These authorized collection sites may be in retail pharmacies, hospital or clinic pharmacies, and law enforcement facilities. Some authorized collection sites may also offer mail-back programs or collection receptacles, sometimes called “drop-boxes,” to assist consumers in safely disposing of their unused Opioid medications.