What Are the Causes of Opioid Addiction?

The causes of Opioid addiction are complex. Many people become addicted to Opioids without knowing that they are using addictive drugs. Unlike illegal drugs such as Cocaine and Methamphetamine, most Opioids are legal medications which doctors prescribe to relieve pain. Therefore, many people who use Opioids and become addicted are neither criminals nor experienced drug users. They are typically ordinary, law-abiding citizens. Although Opioid addiction often begins inadvertently or unknowingly, overcoming addiction requires a personal, long-term commitment to recovery, along with support from family, friends, and professionals.

How Are Opioids Addictive?

Opioids affect the chemistry of the brain by stimulating the Opioid receptors in the brain cells which comprise the brain’s reward system. When Opioids interact with these brain cells, they cause the brain to release dopamine, an organic chemical which causes feelings of relaxation and blunts sensations of pain. Opioid use typically does not result in addiction when someone uses them in moderation to alleviate severe pain, such as after surgery (although it can).

However, even someone who is using Opioids according to a prescription can easily develop a tolerance or a dependence. A person who uses Opioids repeatedly will accustom his or her brain to a certain dosage. When brain cells become less responsive and develop a tolerance to a certain dose, they release less dopamine and the user begins to take larger doses of the Opioid to continue to experience the effects of the drug. This is known as tolerance. At some point, an individual’s brain and body will become so accustomed to the  presence of an Opioid that they will no longer natural produce certain chemicals without it. When the user either stops taking the Opioid or reduces their dose, they will begin to experience withdrawal symptoms. This is known as Opioid dependence.

Opioid dependence precedes addiction, a chronic brain disease which causes a person to compulsively use Opioids despite their debilitating physical and mental effects.

The Problem With Prescriptions 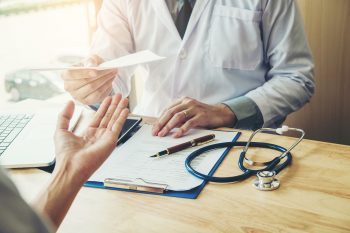 The causes of Opioid addiction are different from other substance abuse epidemics. Most people who use illegal drugs are aware that they’re using dangerous substances. By contrast, many people started their descent into Opioid addiction by filling a prescription for painkillers. In the mid-to-late 1990s, doctors began to prescribe their patients Opioid medications for pain relief. Pharmaceutical corporations which manufactured the Opioids marketed their drugs to doctors and medical associations. As Opioid prescriptions increased throughout the United States and Europe, pharmaceutical corporations earned tremendous profits. For example, the manufacturers of the medication OxyContin used the addictive Opioid Oxycodone as the main ingredient in their product. They earned over $2.4 billion in profit in 2012, a significant increase from their profits of $48 million in 1996. Americans dispensed over 200,000,000 Opioid prescriptions every year from 2006 to 2016.

The consequences of the wave of Opioid prescriptions have now become evident. Opioid addiction has caused many people to experiment with synthetic Opioids and Heroin, both of which are illegal and life-threatening. People who are suffering from Opioid addiction who avoid illicit substances often use stronger doses of legal Opioids and risk overdose. From 1999 to 2017, the primary timespan of the prescription wave, Opioid overdoses claimed the lives of almost 400,000 people in the United States. Even now, about 130 Americans suffer a fatal Opioid overdose every day.