There are many Opioids with new ones created every year. The following includes the most common opioids found both legally and illegally.

Opium is the narcotic Opioid made from the white sap of the Opium poppy plant, also known as Papaver somniferum. Earliest use of the plant for its pain-relieving qualities dates back to 3,400 B.C. Ancient Sumerians referred to it as the “joy plant.”

Thebaine is one of the six most common Opium alkaloids found naturally in the Opium plant. It is chemically similar to Morphine and Codeine but produces stimulant-like effects (as opposed to depressant effects common among Opioids). It is sometimes used in conjunction with other Opiate alkaloids to make versions of Hydrocodone and Oxycodone.

German scientist, Friedrich Sertürner, first created Morphine from concentrated Opium in 1803. It is 10 times stronger than Opium and highly addictive (more so than Opium or alcohol). With the power to calm the body and reduce the effects of traumatic shock, it is commonly injected or used in IVs (pill forms also exist).

Oxycodone is an offshoot of Morphine and similarly used to treat moderate to severe pain. Pain-relieving effects typically kick in between 10 and 15 minutes, peak at about 1 hour, and last for 4 to 6 hours. Ordinarily, Oxycodone is prescribed and consumed in pill form. Sufferers of an Opioid addiction may crush and snort these for more immediate and intense effects. It is a Schedule II substance and 1.5 times more powerful than morphine (mg for mg) – though this number is disputed by some who claim there is no difference in strength.

OxyContin is one of the brand names for Oxycodone. In pill form, it has a time-release coating. People with an Opioid addiction have been known to remove this coating to experience effects similar to heroin. Street names for OxyContin include: O.C., Oxycotton, Hillbilly Heroin.

Percocet is a brand name form of Oxycodone that also contains the (weaker) pain-reliever Acetaminophen. It is used to treat moderate to severe pain. Street names for Percocet include: Percs, Oxycet, Poor Man’s Heroin.

Hydromorphone is a prescription Opioid derived from Morphine and is 5 times more powerful. Effects kick in between 15 and 30 minutes and last for 4 to 6 hours. For patients who are unable to tolerate or feel the effects of Morphine, Hydromorphone is the typical second choice. It is a Schedule II substance.

Dilaudid and Exalgo are two of the most common brand name Hydromorphone pills. These painkillers are specifically intended for Opioid-intolerant patients for use in treating moderate to severe pain. They should not be taken on an “as needed” basis, but for round-the-clock care. 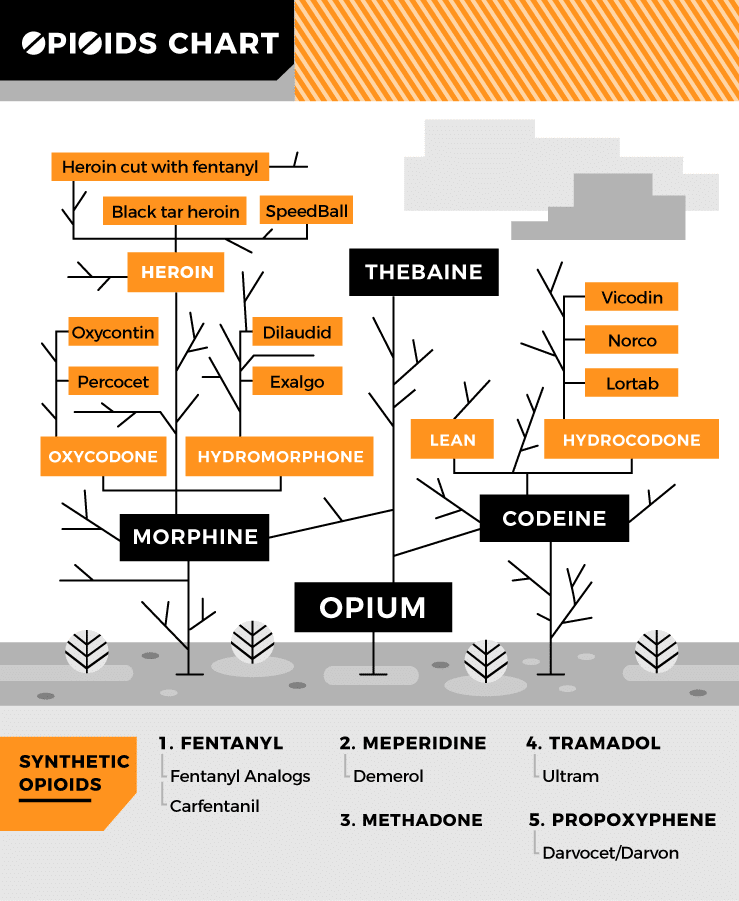 This Chart Depicts How Common Opioids Are Related

The Bayer pharmaceutical company first derived Heroin from Morphine in the 1890s. Originally intended as a less-addictive Morphine-substitute, Heroin addiction skyrocketed in the US until it was banned in 1924. Today, it is typically made up of natural Opium and synthetic additives by drug trafficking organizations. Heroin is widely considered twice as powerful as Morphine, though potency varies depending on whoever illegally makes it. It is a Schedule I substance, meaning it has no medical use and has a high potential for abuse.

Though “pure” Heroin is found in the form of a white powder with a bitter taste, Black Tar Heroin is sticky and more similar in consistency to roofing tar or coal. The black or brown coloring comes from impurities left behind during the refining process. However, Black Tar Heroin is just as potent.

Drug trafficking organizations have begun to mix Fentanyl into Heroin to reduce costs and increase its strength. Because both substances are white, people often can’t detect the presence of Fentanyl until it’s too late and an overdose occurs.

Speedballing is a term that refers to mixing Heroin or Morphine (depressants) with Cocaine (stimulant). Speedballs (or powerballs) are injected with a syringe or snorted. More recently, people are starting to mix pharmaceutical-grade Opioids and Benzodiazepines into Speedballs.

Codeine is one of six common alkaloids found in the Opium poppy plant. It is less potent than Morphine, though still addictive. As a prescription Opioid, it is used to treat pain in children, to suppress coughs, and as an antidiarrheal.

Lean (also known as Purple Drank, Dirty Sprite, and Sizzurp) first gained popularity in Houston within the hip-hop culture. The name Lean comes from people’s tendency to lean or slump over while under its effects. Many rappers have made references to the drink and some have died as a result of a Codeine-related overdose (including DJ Screw, Big Moe, and Pimp C).

Methadone is a fairly common synthetic, prescription Opioid used to treat pain. Methadone is used as an Opioid Use Disorder treatment medication because it blocks the high people get from other Opioids. Specifically, it is used in the treatment of Opioid withdrawal syndrome (OWS) as a medication assisted treatment (MAT). It is also used to prevent or reduce withdrawal symptoms in chronic Opioid addicts. Its effects take longer to kick in (30 to 60 minutes) and vary from patient to patient depending on their Opioid tolerance. Typically, effects last for 8 or more hours. It is a Schedule II substance and is available in pill, powder, and liquid forms.

Carfentanil (also known by the brand name Wildnil) is one of the most powerful synthetic Opioids and Fentanyl analogs ever created. It was originally intended to be an anesthetic for elephants. It is 10,000 times stronger than Morphine and 100 times stronger than Fentanyl. About 20 micrograms (less than a grain of salt) can be fatal.

Meperidine is a prescription Opioid used to treat moderate-to-severe pain. It is approximately 7 to 8 times stronger than Morphine. Meperidine is usually prescribed to treat rigors or rapid increases in temperature, and not long-term pain. It is a Schedule II substance.

Darvocet and Darvon (two synthetic, prescription Opioids containing Propoxyphene) are pain medications that have been banned by the FDA. Potentially life-threatening cardiac side effects in otherwise healthy people forced the FDA to ban their sale.